Launched in early August 2020, Instagram Reels is Facebook’s attempt to answer consumer demand and compete with TikTok. Like its competitor, Reels is the newest way to create and discover user-generated music and performances. The final videos are limited to 15 seconds. App users have access to audio effects and creative and editing tools.

Once know as “musical.ly”, the TikTok app started as a way for young people to express themselves through singing, dancing, lip-synching, or comedy bits. TikTok is one of the fastest-growing social media platforms designed to create, share and discover short-form music videos. Like Reeks, TikTok is focused on appealing to younger users and both have a minimum user age of 13.

WILL TIKTOK BE BANNED? 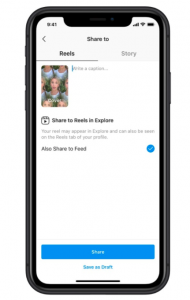 Citing national security concerns, President Trump announced earlier this year of his intent to ban TikTok in the US. The app is owned and operated by Chinese tech giant ByteDance. Trump has stated publicly that the company has a 45-day window to negotiate a sale to a US company or face potential extinction by USA users.

The app has also been criticized by US Senators out of a fear of censorship, privacy, and child safety concerns.

In late August, the sale of TikTok was reported to be potentially blocked by new Chinese government regulations that apply to the export of artificial intelligence technologies. Since speech recognition technologies are part of the app functionality, the Chinese Ministry of Commerce is poised to block any international sale – to help “safeguard national economic security”, according to a Bloomberg News story.

Overall, Instagram (1.8 billion downloads) has a larger audience than TikTok (1.5 billion downloads – through November 2019) – although TikTok’s new user growth has been substantially higher than Instagram in recent months. Certainly, Instagram Reels stands to benefit from the international uncertainty surrounding TikTok.

U.S. TikTok users are generally in a panic mode and looking for alternatives to a platform they have grown to know and enjoy. To thwart an outright US ban, Microsoft has emerged as the leading potential buyer. Meanwhile, Instagram Reels picks up new converts – and, it seems the Chinese government will have the last word on the future of TikTok its U.S. users.